“…above all things, however, over-indulgence must be avoided and a monk must never be overtaken by indigestion; for there is nothing so opposed to the Christian character as over indulgence, according to our Lord’s words, “See to it that your hearts be not burdened with overindulgence.”

Chapter 39, “On the Measure of Food,” St. Benedict’s Rules for Monasteries

Santa Fe is easily the best food city within reach for most Hub City dwellers. Even if you know this to be true, I guarantee you haven’t experienced the food secret I’m about to let you in on. I’m not talking about the slow burn of The Shed’s “Christmas” treatment, the greasy perfection of Blake’s Lotaburger, the flaky, crusty bliss neatly arranged in Clafoutis’ glass cabinets, or even the quirky pop-up shop experience served by Holy Spirit Espresso at the standing-only store. You already know about all that stuff. You may even know the most secret knowledge, like that getting a hotel near the square is the only way to do it, because it puts the best breakfast, lunch, and dinner spots on the short side of a 10 minute walk through the spectacle that is America’s oldest capital city. I’m not here to tell you about any of that. I want to tell you about an eating experience I had there recently that’s a lot more immersive than that.

Northwest of Santa Fe, near Abiqui, 13 miles off scenic U.S. Highway 84, Christ in the Desert Monastery juts upward from the Chama River Canyon floor. It’s a welcome sight for anyone traveling the jarring, dusty forest road that dead-ends there. A warm meadow separates the buildings from the river that’s been carving out the canyon for who knows how long. The monastery is a well-known destination for a variety of reasons. It was designed by the famous designer, George Nakashima; it was on a TLC documentary in 2006; their website, one of the first in its “industry”, was one of the world’s most visited in the mid 90s; because of this, they received attention from major news outlets. They’re also well-known for their chants album, “Monks in the Desert” which garnered them a spot on the “Today Show” in 2012. The monastery is also adored among the Catholic faithful. Thomas Merton, the prolific and intellectual writer/theologian/monk/priest/hermit/jazz-lover called the monastery the, “..best monastic building in the country.” Its dramatic surroundings are no doubt part of that equation.

“Let all guests who arrive be received like Christ, for he is going to say, “I came as a guest and you received me.”

Chapter 61, “On the Reception of Guests,” St. Benedict’s Rules for Monasteries

A ministry of the Order of Saint Benedict is their emphasis on hospitality. They receive guests and serve visitors who want to facilitate a quieting of the mind and spirit. Guests are invited to share in the “monastic way of life” which includes work, prayer, and hours of observed silence. It takes a while to get used to this, because though you may see people frequently, speaking is only truly condoned in sparse increments. This is liberating. At first, I felt a tinge of guilt every time I looked at another visitor in the eye without saying hello, how are you, or where’d you get the beer? Who knew the expectation and obligation to exchange life’s daily pleasantries carried so much weight? I went hours and hours without speaking to anyone. I didn’t miss it… until meals were served.

“…every table should have 2 cooked dishes, on account of individual infirmities, so that he who for some reason cannot eat of the one may eat of the other.”

Chapter 39, “On the Measure of Food,” St. Benedict’s Rules for Monasteries

Meals have to be a serious endeavor for anyone claiming a commitment to hospitality. The monks didn’t disappoint. Our first meal in the refectory came with instruction from the Abbey’s guest-master, Brother Andre, a short monk whose hands flapped the robes’ big sleeves around when talking. He gave each guest a cloth napkin and told us to store it in a cubby hole in the wall when not in use. He positioned himself in front of the closed double doors to the dinning room, “Dinner is a buffet here; help yourself.” He propped the doors open to the bustling communal hall. Gregorian chant music played on a sound system and monks hauled trays of food in, one after the other, as if they were presenting a foreign king with the region’s best fare.

The sound system is drowned out for a few moments with the clink and clang of clean dishes and cups being stacked for the taking. Wooden chair legs groan across the floor as people take their seats. Ice crunches in big bowls when the scoops plunge to fill glasses. Then the cubes crackle and pop when tea and water rush in from pouring pitchers. Plastic twist-tied bags get cut open with a serrated bread knife revealing fresh loaves. There’s a hollow sawing sound as the teeth of the knife chew into the bread’s crusty exteriors. Crumbs splinter off.

The first dish is a creamy soup with long-cut carrots and sugar snap peas that refuse to be easily gathered with the ladle intended. A few inches from the soup, a white rice is waiting. I take a steamy spoonful and dump it in my soup. Next, a pan of meatballs begs for attention by casting its tomatoey aromas straight at my face. The pinto beans follow suit. They make a good point that I need something to balance the tomato’s acidity and legumes’ earthy starches are perfect for that. The corn salsa convinced me to scoop it up on color alone. The deep red and green roasted bell peppers diced up alongside purple onion then cumin dusted was the perfect jolt of color for my suddenly dreary looking meatball and beans crowded plate. But there was still enough room for salad. Barely.

Too many people treat salad like a plan B option they’re obligated to attempt based on what their doctor told them about their cholesterol. To them it’s a necessary evil. But to those monks, the salad is a sanctified metaphor for the divine balance achieved in nature, set forth at the beginning of time by the Creator of all things. Or maybe it’s just a salad to them, but to me, it was a religious experience. Crunchy croutons and firm tomatoes. Soft herbs and crisp cabbage. Salty olives and sweet raisins. Spicy onions and cool bell peppers. Rich olive oil and acidic vinaigrette. The greens were dry and cool and the tomatoes were all carefully seeded so it wasn’t soggy, wet, or wilted. The salad was masterful. It was anything but an after-thought.

After plates were loaded, the room quieted. The chant CD played through the sound system uninterrupted except for the sounds made by the 50 or so spoons, knives, and forks involved in the business of dinner time. The twenty or so monks sat on one side of the room while the 20 visitors sat directly opposite. The tables were long and made of heavy wood, probably crafted by the monks at some point. A monastery must be self-sufficient. For instance, the hot sauce at the table, “Monk Sauce”, was made by a monastery in Arkansas, and it was exactly what the soup needed that day. In the monastery gift shop one can find monk-made communion wafers made someplace and leather-bound journals made another. The Christ in the Desert monks have a line of beer. While monks brewing beer is a tradition as old as the Old World, their “Monk’s Ale” was the only monastery owned brewery until recently, when it sold as most “craft” breweries are want to do these days. 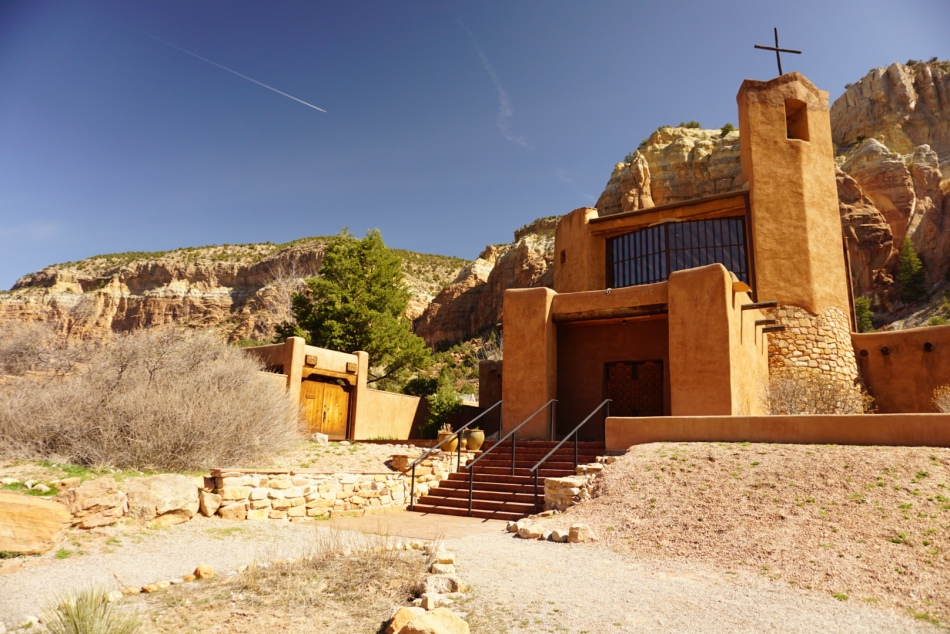 Meals are something special at the monastery. Not just because the food is simple and delicious, but because it’s a communal meal… in silence. You notice more. You notice how a monk brings out 3 blocks of cheese with a big smile on his face after everyone has already begun eating. Words unspoken tell you it was his responsibility to have it out sooner, but he forgot. One monk raises his hand, two fingers, and eyebrows and you understand he wants the forgetful monk to brink him slices of the white mild block. The cheese knife knocks against the wooden cutting board twice as thick slices fall away. You notice how people eat, too. Three asian monks drank hot tea at every meal from tall, clear glasses. Why they didn’t use tea cups, I’ll never know. One young redheaded monk held his soup bowl 2 inches below his chin, never putting it down, even eating bites of fresh bread from his free hand between spoonfuls. He either had severe neck problems that caused him not to be able to crane down over his bowl, or he had, in his mind, found the ingenious work-around to compliment the extreme inefficiency of the western way of soup-eating. One east-asian monk ate what appeared to be all dinner dishes from one bowl, with a spoon. Each spoonful contained lettuce, beans, rice, meatballs, and soup. Now that looks efficient. The silence can get a bit awkward while eating, and there’s no place to look accept straight ahead to the table of monks across the room looking back at you.

Unlike the dinner buffet, lunch is full-service, called the main meal. Instead of playing the chant music at this meal, a monk stood at the microphone reading St. Benedict’s Rules for Monasteries line by line. I learned how a man becomes an abbot. That’s not what kept my attention though. Instead, I discovered fresh baked bread. How has a spoonful of peanut butter or a schmear of Nutella across the airy plane of a slice of fresh baked bread stayed foreign to me for so long? I was so completely enthralled I mostly missed the clockwork ticking of the monks’ food service offering. At main meal, each dish is paraded before you like frankincense to baby Jesus. If you’re lost in a simple slice of bread, as I was, you may miss the fact that each dish is a new concoction utilizing the previous day’s fare. The vegetable soup from the night before has some tomato and spaghetti noodle added to it; the lentils have cozied up to diced potatoes in what appears to be a twice baked casserole. Not only is the food simple and filling at the monastery, it’s loaves-and-fishes sustainable. But I was too lost in my bread to notice the simple bliss and versatility of simple food.

I think that’s what the monastery is all about. It’s about the refreshing sustainability of simplicity. Even when it comes to the food. The monastery left a lasting impression on me. I doubt it was the effect the monks were going for, but as soon as I got home I found a bread machine on Trading Up and have been baking bread every weekend since. Four months later and I’ve only recently gotten close to the perfect white bread recipe. I’ve heard it said man cannot live on bread alone. I get that. Now I understand why he thought he could in the first place. 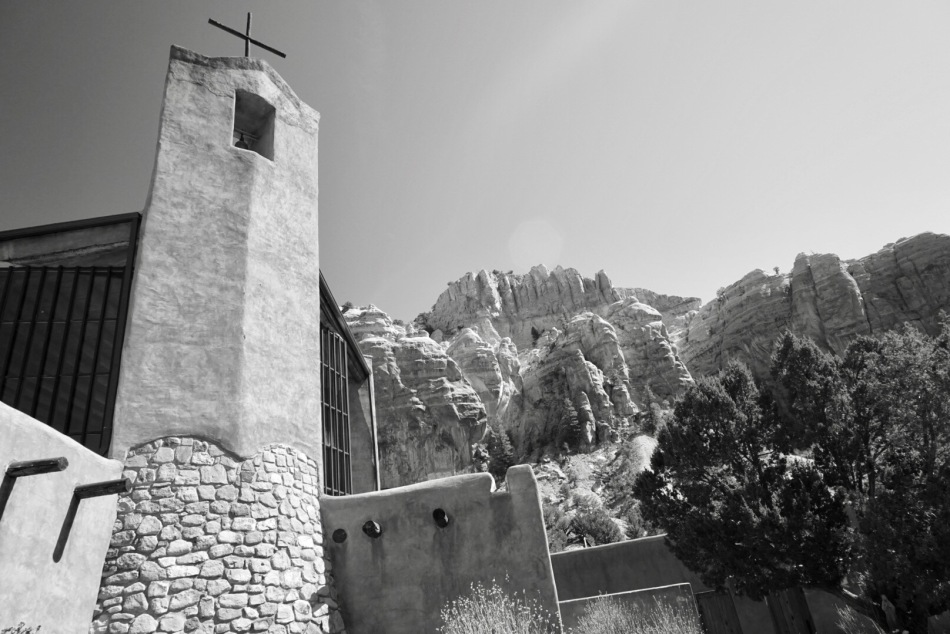