The only reason worth drawing a distinction between a hot dog and a brat is so that you can understand what kind of bunned bliss awaits you at Flippers Tavern on Avenue Q.

A hot dog, unlike a brat, has a smooth, processed interior. A brat has a coarser, more natural grind. Hot dogs are emulsified meat product squirted into conveyor-belted casings by a plunging, automated stainless steel phallus that’s tip eventually needs replacing after it accumulates a certain number of factory hours. Brats on the other hand, and particularly Flippers Tavern favorites, are handmade in Post, TX, by Jackson Bros. What I’m saying is, even though Flippers calls their menu items “dogs”, there’s a big difference between a hot dog and what Flippers is slingin’. Flip’s is too punk rock to not downplay their strengths though. 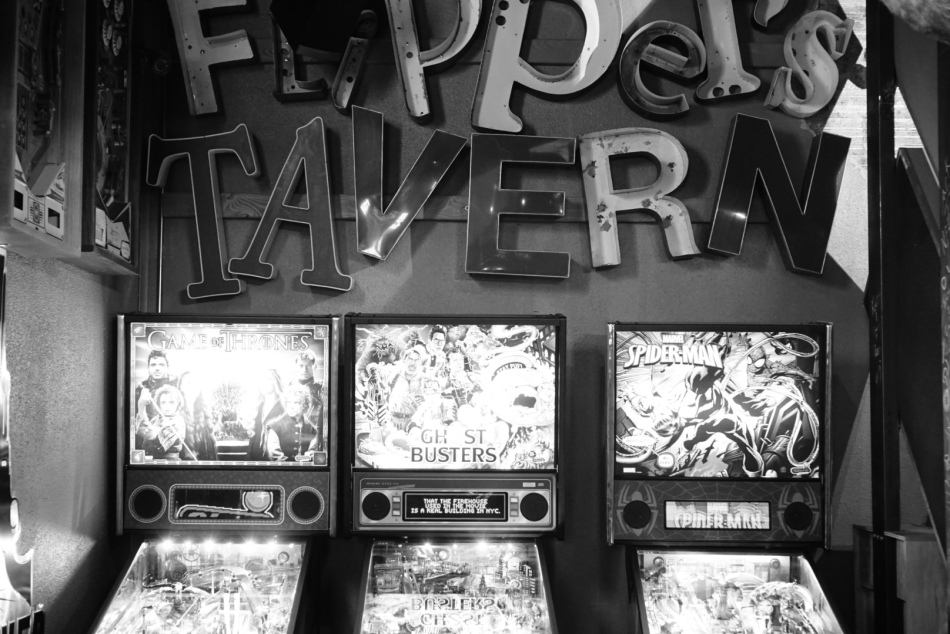 Flippers is a brat bar serving up funky combos that would make your dad’s head explode. I don’t know your pops, but mine is the kind of All-American guy who’s been eating a microwaved Oscar Meyer weiner on sliced bread with Miracle Whip for as long as I can remember. So, just the idea of a brat like Flip’s “French Tickler” (brie, curry cranberry mayo, red onion jam) would make him short-circuit, pondering the very fabric of his existence. Flip’s condiment game is second to none. With a handful of fresh, non-typical hot dog flavor bombs (for example: ginger, cusabi, lemon garlic aioli, pineapple) they’re able to deliver something that satisfies intercontinental hankerings. 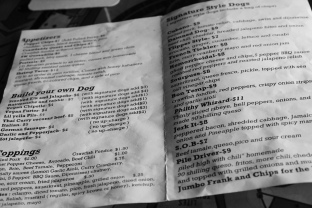 Flippers is a brat bar serving up funky combos that would make your dad’s head explode.

Luckily, you don’t even have to make it far into the menu before you realize Flippers Tavern is a special place. It’s got something the vast majority of local eateries struggle to find. No, it’s not a nickname. Flips has something restauranteurs usually hire consultants, agencies, and fast-talking out-of-towners to get. It has a strong brand. Too much food these days lacks a point of view. Not Flips. It has a personality all its own. Flippers Tavern has perspective, and when it comes to food, that makes for a unique experience that’s too hard to find in today’s monocultural landscape. 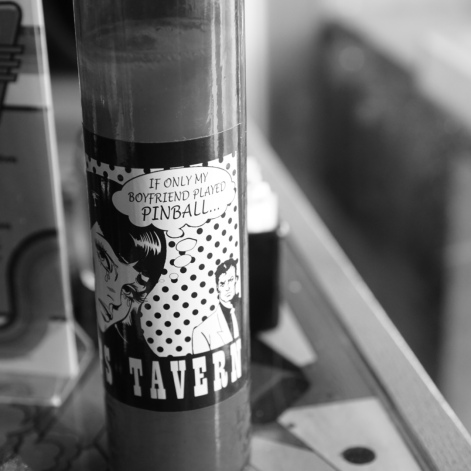 You don’t have to wonder what Flips is about. Flippers Tavern is all about making you question clean-cut nostalgia. Can a hot dog-that Ned Flanders 4th of July staple of red-blooded Americanism be obliterated and re-built to showcase a streak of multi-national rebelliousness? Yes (try the best thing I’ve ever had there, this month’s Thai Breaker). Flippers conveys the punk rock, anti-establishment morsel that’s to be found in everything. You don’t look around and see the wall-to-wall pinball paraphernalia and think about your 5th grade youth group outing to Buffalo Nickels Arcade. Rather, the universe magically bestows upon you the seedier context, the real history of pinball, which is that it was illegal in most major cities until up until the 1970s. It was a mafia racket in New York and Mayor La Guardia smashed machines in citywide raids. Punk rock! Even the Buddy Holly cut-out on the front door metaphysically imposes less than wholesome knowledge about the area’s golden boy. You’re not reminded of the chaste and virtuous Peggy Sue when you see it. Rather, you’re suddenly aware of Holly’s brief encounter backstage with Little Richard’s girl, Angel. You’ll see the world different at Flips and you’ll be better for it.

Even the Buddy Holly cut-out on the front door metaphysically imposes less than wholesome knowledge about the area’s golden boy.

Flippers keeps the offerings fresh, too. There is always something new and delicious to try. Whether it’s one of their special dogs, a monthly-updated compilation of thematically unified deliciousness, an old menu standard, or a build-your-own, you can bet your dog will come correct. If the thought of mauling a messy, saucy bun-bound wad of everything you need for nutrition and pleasure intimidates you, try the wraps. They are clean to eat and the brat inside comes sliced which means you won’t have to work hard to tooth-snip the sometimes cumbersome casings for a clean bite. Speaking of cumbersome, there are two other things you might notice. First, the food and service can be on the slower side of the spectrum. It’s not a bad thing because there’s plenty to take in, but planning your visit accordingly is worth it. Second, it’s not exactly comfortable. But it’s worth it because everything you give up related to anatomically accurate tables, or booths that are easy to sit at without having to climb into like some kind of culinary cockpit, you gain in shear wonderment at the fact that all the tables are shiny, lit up, pinball machines. Tell me that’s not rebellious… to eat a full meal off a surface that wasn’t designed to hold it. 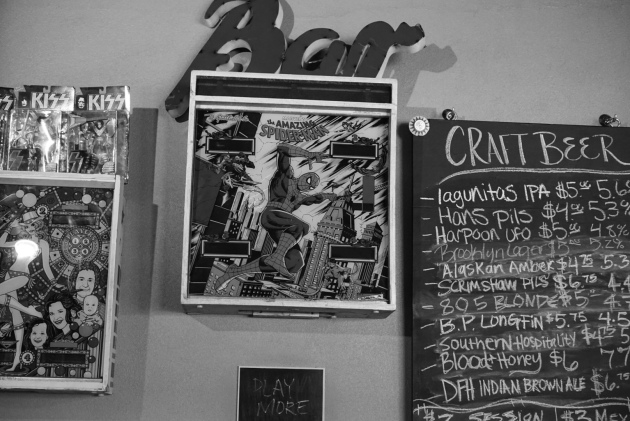 Your desire to please everyone is making you boring, and if we’re looking for boring we’ll probably go somewhere faster and more consistent.

Lubbock, while growing to offer all the conveniences and corporate options of cities twice its size, is ground zero for passive food and dinning experiences. It’s franchise land, corporate world. Every burger place is the same except for the color of the cup and the cut of the fry. Every Mexican food place is the same except the queso and the order in which the menu items read. Sure, some of it is better and some worse, but why does it all have to be so tepid and uninspired? Is it the fear of offending someone if their menu is too bold? Perhaps they’re worried their oeuvre will be seen as too ambitious for West Texas. Or have they resigned knowing secretly Lubbock is being slowly overran by food tweaked in a corporate office boardroom in Dallas, so why even bother? It’s time small local owned eateries follow Flipper’s lead and flip the bird to monoculture. Nobody wants an indy to look corporate, so please quit trying. Your desire to please everyone is making you boring, and if we’re looking for boring we’ll probably go somewhere faster and more consistent. We genuinely want to see pictures of your family and Dallas Cowboys’ or NASCAR memorabilia covering every square inch of your establishment. We don’t care if it doesn’t look “franchisable”. We want it to look real. Honest. We want more food with a point of view. We want more places like Flippers Tavern.

0 comments on “Flippers Tavern: Flipping the Bird to Monoculture”