A little over two years ago I moved to Lubbock from Amarillo and immediately began scoping the food scene. Looking for all the best places to eat and drink, I started hearing people mention Manna Bread & Wine. Ooooh the cake, oh the bread. Great, where is it? Well, it just closed a few months ago, but there is a new lunch spot with some of the same people involved. Hello, The Pickle & The Pig… Meatloaf sandwich, green chili Mac. Yes, please. Then as I was working my way through the menu there they shuttered the venture. A few months later, as I was forgetting there was ever a trend-forward, deeply subjective approach to the service of a single meal, which is the kind of fanatical focus I can really appreciate, Brunch at Stonegate reared its funky fresh head. I went once, then it too closed. All this begs the question, who the hell is Sara North and why won’t she commit to feeding us as often as we’re willing to pay her for it?

I could understand her flight from the restaurant scene if I had been to any of those places and had bad food. But I never did. I think a restaurant can survive anything but bad food. The fact is delicious food and inventive menus cover a multitude of sins. For instance, The Pickle & Pig’s Sunday-after-Catechism-pot-luck atmosphere made the exchange of money at the end a real head-scratcher. I even felt overwhelming shame once, in the Pickle foyer, but that could have just been the repurposed wicker collection basket I accidentally knocked off a table, its tensile crackle a reminder of the ten percent I once spent on James Peterson’s Meat: A Kitchen Education cookbook instead of tithing in 2010. And speaking of odd dining experiences, at Brunch at Stonegate, you may not have missed your order if you’d decided to pick up a bag of the golf clubs you stepped around on your way to the restroom and stepped out to get in a quick nine holes during the wait. All can be forgiven, by most. Atoned for by chicken and waffles. Just a fleeting glance of The Pickle’s Cowboy Cuban, or the over-sized, garden-in-a-jar Bloody Mary at Stonegate could make you forget so much related to the mild discomfort necessary required to experience it. I can see why bad restaurants open and close before you get to test your first impressions with a second visit. But it’s much harder to understand why places are gone too soon when the demand is outpacing the ability to satisfy it; when there’s more butts than seats so to speak.

When I met Sara North, executive chef, to check out her new kitchen, soon to be open, King Street Pub with adjoining Queen of Tarts Bakery & Cheese Shop, I wanted to know, is this all just an elaborate PR stunt? You just start and stop things until you have the public around your finger, always pre-hyped about the next thing? Are you trying to Daniel Day Lewis us, and quit at the height of intrigue so you can avoid an embarrassingly public Brandoesque Island-of-Moreau-style unraveling? She says the answer is no, admitting this isn’t the first time she’s been accused of it. The restaurant and bakery sit at the far corner of the Kings Park shopping center on Indiana and 80th, beyond the Taco Villa. They’re waiting on a few more approvals from the city before they can get going, although from the looks of the inside, there is a list somewhere with quite a few to-dos to check off before the building is ready for full-service. Even so, it’s taking shape.

Ellen Chappell, director of catering and longtime North-kitchen devotee, walked me through the building explaining the owner’s vision. The owners of the new venture are actually Sara’s mother, Sally Good, and her partner David Majoras. The shy Sally Good, who at the mere sight of my camera became impossible to so much as make eye-contact with, was also the architect (alongside Majoras) behind Manna Bread & Wine. A methodological, kind of PhD creative, Sally has the kind of mind that’s seemingly fueled by intellect and rigor as much as anything. The self-taught cook and apparent hoarder of books related to all things cooking and food created and later sold Manna at the height of its popularity. TripAdvisor and Yelp confirm the ratings started to get ugly after 2012, around the time the establishment became under new ownership. Around the time Manna sold, a second venture was taking shape in Austin. However, the restaurant, named Texas Nation, didn’t last. So Good, the autodidact oenophile and cheesemonger sold her second restaurant and even swore off the industry at the height of the Great Recession.

At the same time Mother was throwing in the tea-towel on the restauranting life, Daughter was coming into her own in the kitchen. While Sara admits Sally taught her everything she knows about food and cooking, she doesn’t downplay her time spent traveling. According to Sara, at age 19, just starting her career and on her third major at Tech, she cashed in her student funding and moved to Rome to study arts and culinary. She credits the experience as a major milestone in the development of her inventive flair. It also gave her imposter syndrome. Her “mind was blown” by how little she knew about the kitchen. She returned to Manna, reinvigorated and hungry to learn everything she could. Sara continued to run the kitchen for a time even after her mom sold it. Her first “true” kitchen, meaning truly hers to run, was the second venture in the Austin-area. Texas Nation, as described by Sara, was a “big, beautiful steakhouse in a vacation town” during the biggest economic downturn since the Great Depression. While mother threw in the towel, Daughter continued to cut her teeth in a few Austin kitchens before returning to the open arms of the Lubbock food scene—namely a few of her old Manna staff, with whom she was dreaming up The Pickle & The Pig.

The staff included Zach Altamirano, who started cooking years ago at Gardski’s, and who has been in orbit of the North-kitchen for eight years since working at Manna; and he swears he wouldn’t have it any other way. Sara says, “He’s not necessarily a foodie or anything, but he’s really good, very loyal, and always reliable.” A perfect sous chef really. When the opportunity came to work with North again for The Pickle & The Pig, he was in and managed the kitchen there. Ellen was explaining all this to me when Zach walked around the corner wearing a tool belt. He’s done construction since Pickle closed and probably would’ve been all in to work brunch at Stonegate if the hours hadn’t been so limited. He jumped at the chance to work at the full-scale King Street Pub where he’s been named sous chef. He just has to finish building it out first. Ellen is the same in her steady allegiance to the North-kitchen. She’s also been in the mix since Manna. In a lot of ways, King Street Pub is the whole band getting back together again. Sally hasn’t been involved since she devised Manna. Ellen wasn’t fully in at The Pickle & The Pig and Zach wasn’t around during the Brunch at Stonegate days. They’ve done some very successful and highly regarded catering together, but catering is different. Catering is what you do “so you don’t get your car repoed”. The A-team is back together and stakes couldn’t be higher. King Street Pub and Queen of Tarts Bakery and Cheese Shop is Sally Good, and partner David Majoras, putting it all on the line one more time and they think they have the team to do it.

When I asked Sara what menu items she’s most excited about, her eyes shifted across the menu several times before she said, “Where are the burgers? Did she (Sally) take those off? See… I don’t even know if this is the newest menu because we spent forever on those burgers and now I don’t see them.” Sara is cooking Sally’s menu (Ellen and Sara jokingly refer to Sally as the Queen) here for the first time since Manna Bread & Wine, and she admits they have a completely different creative approach. “See, I could start a restaurant tomorrow and plan the menu tonight and be great with it… But I’m really too hasty.” Sally on the other hand, has labored over the Kings Street menu for the last year, cataloging research and ideas across the pages of several notebooks. Sara wants to launch and tweak along the way, while Sally says it must be perfect on day one. While there is a kind of tension between the two, Sara readily admits that it may be just the structure she needs. While Sally is most excited about the Bakery & Cheese Shop, the culmination of her several years of cheese making and the tedious perfection of an exquisite sourdough—among other things; Sara, Zach, and Ellen will be the first to tell you it’s Sally’s menu they’ll be serving at King Street. However, Sara’s imprint will be there. In the 20+ menu meetings they’ve held over the past year, Sara has won her fair share of marks in favor of locally sourced ingredients, more time-intensive preparation methods, and even a few trend forward flourishes from the world of molecular gastronomy. All things Sally may well deem as too extra for her more traditional commercial kitchen approach. But there’s a give and take. Sara points to the menu and says, “This is going to be great. It’s a 44-ounce tomahawk ribeye. We actually had to bring in these really large plates for it.” She holds her hands about 18 inches a part.

The menu and overall aesthetic is sort of Victorian-themed with a hint of West Texan steampunk bent. The titles of the dishes and cocktails are expertly curated by Sally, a former college English professor, who has given each item a name that nods to literati, but in a fun way, with none of the pretentiousness you might expect from a place offering a menu that was just described to you in a blog as being “Victorian-themed with a hint of West Texan steampunk bent.” There’s buffalo schnitzel, poutine—with oxtail chipotle gravy, and Cigars and Brandy—a duck spring roll with brandied dipping sauce. Oh and there will be rosemary bread, apparently something that Manna patrons went wild for, a confirmed phenomenon in the ancient annals of TripAdvisor’s dusty digital record. 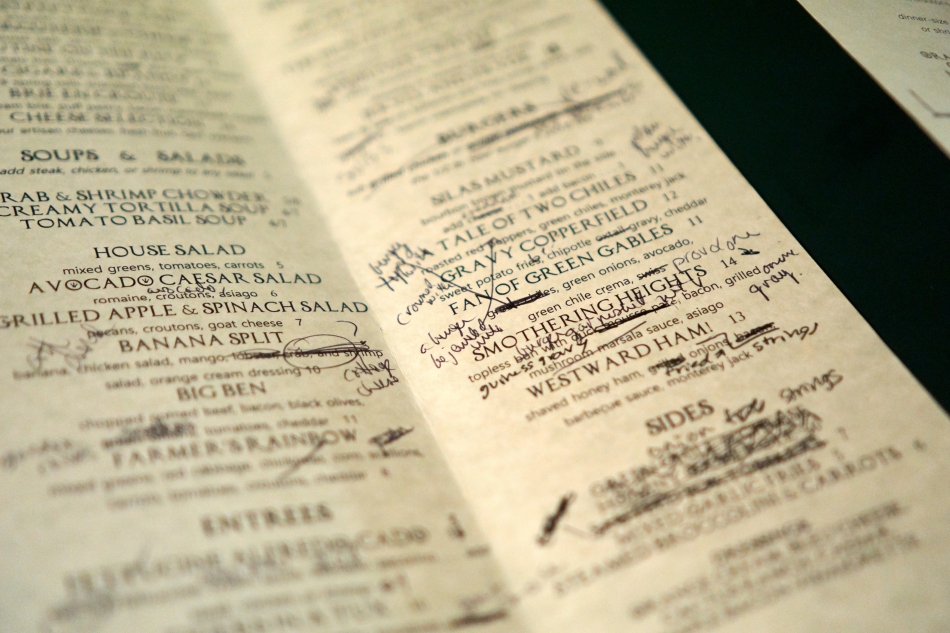 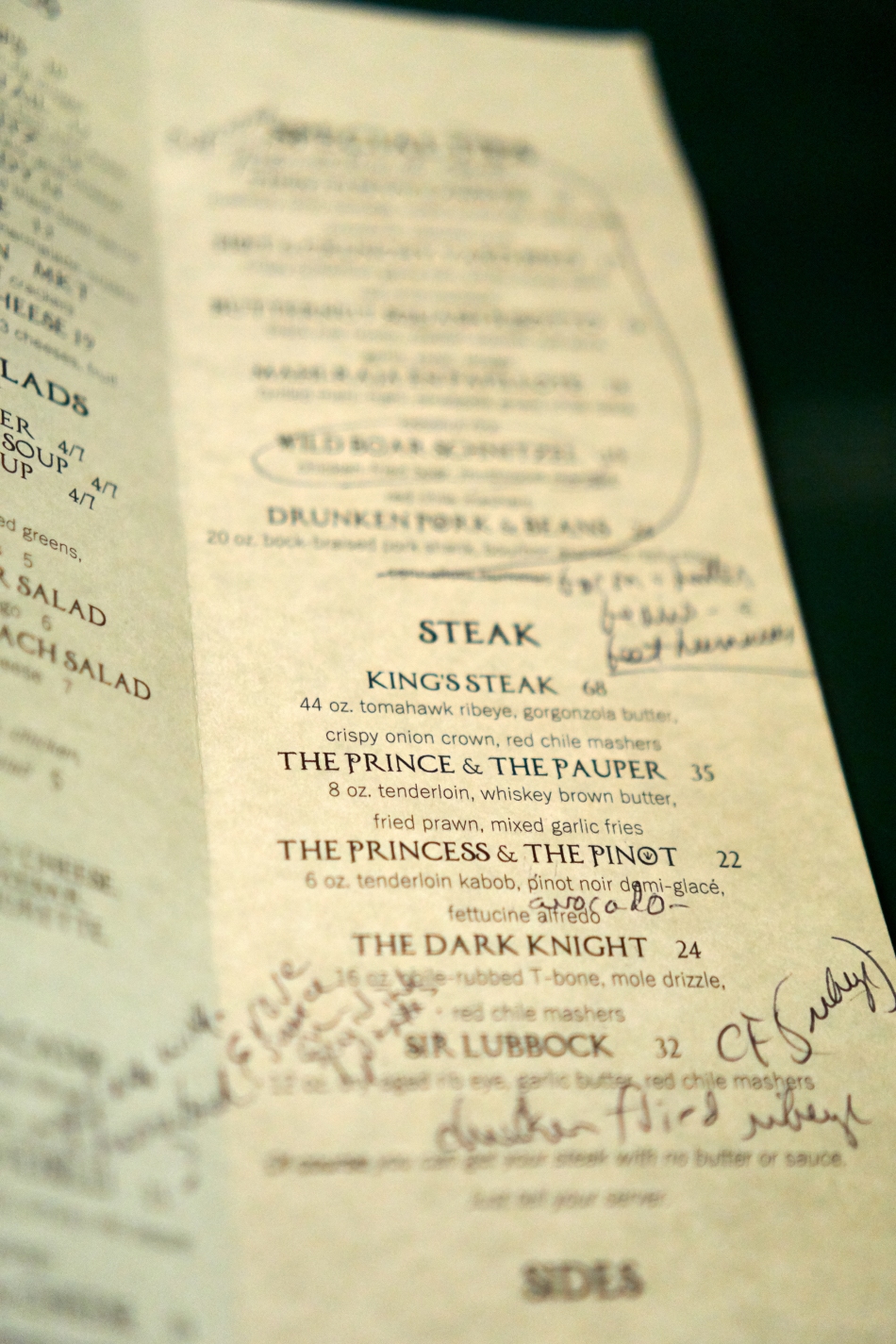 The work-in-progress menu iterations tell the story of a years worth of conflict and resolution between the two. But there’s something about the specific moment in time in which these two insanely creative women are converging again, both older and wiser, itching to create something from nothing again, together. Both having received their lumps from the chiding industry in this age of the consumer. Not only are both acutely aware of their creative limits and operational weaknesses, but lessons learned seem to have taught them to lean on one another in certain matters every chance they get. Maybe that’s the secret sauce for being able to eat from a North-kitchen whenever I damn well please.

If so, all I can say is long live the Queen.

*The bakery and cheese shop will open first, likely before June. They will have local cheeses, a house cheese, and several excellent breads. Dinner at Kings will open second, in the weeks following. Lunch will be the final opening, likely in the 2-3 weeks following dinner opening. The bar will open serving mostly simple, traditional cocktails–as you can imagine, Sara has thoughts on that and promises some craft action.

2 comments on “Who The Hell Is Sara North; And Why The Hell Won’t She Feed Me?”