I could be wrong, but it seems like we’re receiving a hot dog for every single kolache we order.

I’m not sure who to blame for this, but it’s time I said something. I don’t think the pastry-based snacks sold to us at every local donut shop are what we think they are.

The first time I noticed this was at a co-worker breakfast. I had just moved to Lubbock. In planning the breakfast, someone said “Oooh, I’ll bring kolaches”. Everyone thought it a great idea and offered their recommendation for the best spot to get them. I knew something was amiss here when someone yelled, “Get extra mustard!”, and someone else said, “…and jalapeno!”

But I ignored the warning signs, like I always do when it comes to food. Like one time in Houston, at the Montrose Tex-Mex palace El Real, I ordered some of their Habanero salsa which had a funny aftertaste. It was a taste I could only describe as a very peculiar… whaang.

That salsa definitely had a whaang to it.

But every time I ate it I explained the faint funk away. I’d take a big bite then say something to my wife like… hmmm, I think there may be mango in here… She’d respond, “I don’t know. I don’t like it.” Meanwhile I’m loading another chip. Then three more chips. Then I’d say something like… you know, I bet these Habaneros were roasted which would probably explain the sweetness… She wasn’t buying it for some reason. She knew better. Turns out that hint of mango was probably something bacterial along the lines of a Clostridium perfringens. That delicate sweetness my seasoned palette was picking up was probably a little bugger known as Bacillus cereus. I figured this out over the next two days as the drawn-out relationship between the salsa and me resolved in much contempt.

The calls for mustard and jalapeno should have been all the warning I needed to appropriately set my expectations of the kolaches, but I held out hope for the next morning’s breakfast. Many Habanero salsas actually have mango as a main ingredient. The two pair together like beans and rice, like chicken and waffles, like Lubbock and… Amarillo. So I’ll take another bite. So maybe these Lubbock Texans knew how and what to eat with their kolaches. I was expecting to see little square yeasty rolls with a crater right in the center. And in that crater in the center, I was expecting to see fruity, jelly dollops of purples and deep reds dusted over top by powdered sugar. I was also expecting to see a few with cream cheese. I had no idea where mustard and jalapeno would enter the equation, but I was ready to let it happen.

Turns out LBKers think a hot dog is a kolache if it’s eaten before noon. I’m not sure who is to blame for this farce, but to set the record straight: anytime you put anything resembling an Oscar Meyer wiener in a bun adorned with yellow mustard from a squeeze pack… you’re dealing with a hot dog and those aren’t for breakfast, unless your life depends on it and I’m not going to say you’ll never find yourself in that situation.

I hesitate to point the finger at the Asian donut shop owners here, because how are they supposed to know what’s what? We can’t expect them to learn Czech or Slovak in addition to the English language. I want to say it’s their fault, I do. But I’m telling you right now if I went to Saigon and started selling Bún thįt núróng to everyone and calling it Sopa Seca De Fideo with Pork, I guarantee you someone would say, “We call this Bún thįt núróng.” All I’m saying is maybe we should tell them it’s a hot dog.

“What I’m saying is this: there are a lot of variations on the delicious American classic and maybe I’m not ready to give Czechs credit for all the work West Texans have done to codify mustard and wieners as standard breakfast fare.”

I get it, I was almost fooled myself when I saw the flaky, pastry-style hot dog bun fully enclosing the wiener. It did seem like something else… something with European roots. But I was reminded that hot dogs and their buns come in all shapes and sizes these days. For instance, the Fenway Frank at the Red Sox stadium is served in a flat-bottom split-top bun, the same as the lobster rolls that can be had throughout the New England region. Wienerschnitzel, or Der Wienerschnitzel as anyone over 45 calls it, has an option for a pretzel bun. In places like Manhattan you can get a bagel dog, which is a wiener fully enclosed in a bagel the shape of its wiener contents. A Montreal-style dog has coleslaw on it. What I’m saying is this: there are a lot of variations on the delicious American classic and maybe I’m not ready to give Czechs credit for all the work West Texans have done to codify mustard and wieners as standard breakfast fare.

There are risks to misclassifying them. I’m worried if you don’t quit calling these hot dogs kolaches, the first time you have a real kolache you’re going to call it something else setting off a false pastry recognition chain of events that will sooner or later have you misidentifying pastry foods you previously knew the names of. You’ll be saying empanadas when you mean cronut, and you’ll call croissants Kellogg’s Frosted Strawberry Pop-Tarts, and I don’t want that for you. Hell, I don’t want that for anyone.

I’m suggesting a movement to claim the kolaches we know and love from the Czechs. I’m hoping even Czechxans will agree—the West Texan kolache has strayed too far to not have its own uniquely branded designation.

I’m open to suggestions, but here are a few to get the conversation started: This is like a hot dog on a fresh bun. It tastes like a bun you’d buy from the fresh deli, not the bread aisle of your neighborhood United. It’s semi-sweet, tasting like it was sweetened with honey instead of sugar. It actually tastes better than one of those Market Street baked goods. You know the ones that are pretty good but they’re 53 minutes away from turning hard as a rock and only 3 hours away from being completely covered in mold.

Donut Depot’s kolaches are slightly better than Rise’N’Shine’s. Not only do they have a better bun-to-weiner ratio, they also throw a curve ball with their ham and cheese offering. Even if it was just a rolled up piece of lunch meat, it seemed special because I didn’t see one like this any place else. And I received a complimentary cake donut, which had the perfect amount of sweetness for me to love and my wife to say, “This doesn’t have any flavor.” If I had to guess, Daylight Donuts’ kolache is probably an area favorite. The bun is like a deep-fried funnel cake type of bun. It’s biscuity, doughy, and semi sweet. I think it’s actually donut dough without the glaze or cloying sweet accompaniments. If they could find a way to lighten the batter up, it might rank higher. But as is, it is a bit too dense. Jack ‘n’ Jill’s kolache may look like an ordinary hot dog wiener cloaked in leavened lightness, but it’s the leavened lightness that has it ranking so high. This dog’s bread jacket is flakier and lighter than anything gnoshed so far. They could have slam dunked the competition if the contents were reminiscent of anything other than an Oscar Meyer hot dog, but alas, these are hot dogs we’re dealing with. Forgive the whack weenie in the photo, but a breakwurst can only look so appealing splayed across the cold stone of a marble cheese tray on my kitchen counter. There’s one reason this kolache has the slight edge to Jack’N’Jill. Its bun is more neutral. It’s less yeasty and it really lets the sausage shine. The texture of the bun is a little more delicate, too. It’s the best bread I tried, and the frank… Seemed like a standard ole’ weenie, unfortunately. 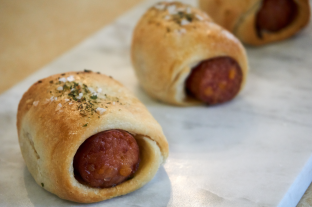 There are several things right about the made-from-scratch kolaches at Sugar Brown’s. To start with, they’re adorned with sprinkles of salt and herbs, which doesn’t sound like a big deal but the crunch you get when you bite into a salt flake is a different kind of satisfaction beyond taste alone. The hot dog-to-bun ration was also spot on with these. And speaking of hot dog, this one was good. It tasted better than Oscar Meyer, in fact they may have even splurged on these because they tasted juicier than the others. The only thing I didn’t love about Sugar Brown’s kolache is the bread. It had the sweet, crustiness of a pie crust and the dense heft of a buttermilk biscuit. It was a little too dense, although not as much as Daylight’s. City Do-nuts has pretty much won me over with their airy wispy white cloud buns.

Despite the fact that City Do-nuts may have a better meat kolache (whatever that is) in all its simplicity, Sugar Brown’s may just be the best. Because there, at least you can get a real kolache with fruit and cheese.

Who did I miss? Who has your favorite kolache in LBK?

7 comments on “Lubbock, Czech Yourself: A Kolache Rundown”

There was an error retrieving images from Instagram. An attempt will be remade in a few minutes.