What I Ate: Breakfast Burrito, 10-inch tortilla, with bacon, egg, and potato, and Daily Special with egg, bacon, hash brown, and biscuit.

You think about a lot of things when you get to your first appointment at Houston’s world-renowned MD Anderson Cancer Center. If you’re me, at least one of those things is food. The fold out maps you can get (every bit as feature-rich as a map you’d get at a national park) at several wall kiosks around the facilities boast 10 different eating options around the campus. They all have modern eatery names like The Oaks, The Lantern Cafe, and Fresco’s. The first day of poking, prodding, petting, and interrogations got me feeling ravenous with hunger; we ended up settling for a late breakfast at Waterfall Cafe.

We spent the first 30 minutes of the day jumping curbs, spinning u-turns, and whipping our necks left-to-right looking for signs before happening upon the valet main-entry.

I realize only a select few of you will ever have the opportunity to experience the fare at the cafeteria-style Waterfall Cafe as I did: with metastatic papillary thyroid cancer (fewer than 15,000 for males according to American Cancer Society). But if you ever do end up there, you’ll know what to expect. Now getting to Waterfall is a trek, but everything is at this city-within-a-city. Coming from the Main Building (go there, you get free valet parking your first trip, and you quickly realize it’s worth paying for even if it weren’t free: we spent the first 30 minutes of the day jumping curbs, spinning u-turns, and whipping our necks left-to-right looking for signs before happening upon the valet main-entry), you’ll take the mile-long sky bridge to the Mays Clinic-don’t worry there’s a shuttle for the bridge. Once in the Mays Clinic, look for the tree sculpture, then boom, Waterfall Cafe.

Take a Look at the Menus Below: 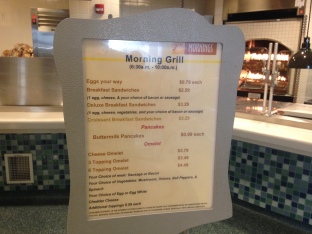 With a breakfast taco bar, Morning Grill, morning selections, and daily selections; you can find some proper fueling at Waterfall Cafe. After all, you’re in the world’s premier cancer institute. A fact not lost from the moment you get within a few miles of Houston’s medical district. Shiny-windowed buildings jut skyward from massive ferns and palms, each an outpost for some upper-crust Texas university research facility. These are the front lines and you can feel it. But you also see vegetable gardens, waterfalls, lush botanicals, serene nooks, and still crannies engineered to offer weary searchers deep breaths and moments of zen. Luckily there are places with food, like Waterfall Cafe, because once you arrive at MD Anderson, you don’t want leave. At least not until you’re better.

But it’s different over breakfast, because breakfast is what we did before we were sick. We came together around pancakes and biscuits and orange juice and oatmeal. But at Waterfall Cafe, it’s what you do after you’ve found out you’re sick, too.

The dinning room experience at Waterfall Cafe may seem ordinary to the non-afflicted, but for patients it’s something altogether different. It’s like wound-licking. It was the first time I experienced a bit of camaraderie over some normal human activity: eating. In fact, MD Anderson as a whole is full of fraternal encouragement. The veteran patients must sense the fear and confusion across first-timers’ faces. At our very fist stop for directional assistance a woman interrupted us, “This is the best place on planet earth for you right now. They’ve kept me going strong for 10 years longer than anyone else said was possible.” Some one else told us something similar on the elevator an hour or two later. “Don’t worry, you’re in the right place for you right now. They’re going to help you.” You begin to feel a real kinship with other white wristband wearers the moment you arrive. When you see a few people in any hallway, you start to look at their wrist to identify who the patient is, hoping for an opportunity to give a nod that would say: I know, but we’re alive right now, and we’re here in the best place. There’s camaraderie all over the campus, for sure, in the blood work lobby, in the imaging waiting room, in the endocrinology wing, in the places you’d expect it. But it’s different over breakfast, because breakfast is what we did before we were sick. We came together around pancakes and biscuits and orange juice and oatmeal. But at Waterfall Cafe, it’s what you do after you’ve found out you’re sick, too.

You could complain about a lot when it comes to Waterfall Cafe’s breakfast burrito or styrofoam-plated daily special. Start with the fact that rosemary doesn’t belong near a tortilla, bacon should be greasy and only partly crunchy, scrambied eggs need a little moisture and texture variation throughout, only McDonald’s has earned the right to sell hash browns in elongated puck form, shredded cheddar should always be in the process of melting, and a biscuit feigning formation by human hands with engineered inconsistencies is nothing but a cold-hearted lie. But when you’re in MD Anderson, you trust science more than ever. You look around and see surgeons, research fellows, and the nation’s most highly skilled disease experts being served from the same gravy ladle as you. You start to believe maybe these spongy eggs of uniform dryness are all the sustenance needed for the fight according to the world’s most innovative research. You trust the biscuit, because all you can do is trust at this point.

They spoke jovially, unencumbered. They didn’t have to wonder if they were saying too much, going too deep, thinking morbidly, or speaking too candidly thereby reminding someone of our shared mortality. They just talked about life’s real and scary circumstances.

You don’t think about the food too much. You’re just happy to be meeting your basic human need among the others. I stopped noticing the rosemary as I overheard two women talking sitting behind us, colorful scarves wrapped neatly atop their heads. One lady, probably in her 30s, was explaining the ropes of the place to a new friend. She buttered toast while telling the new patient about the lady at Support Services. They agreed she was very good. Then she started explaining how her brother was recently diagnosed with the same aggressive disease. She was headed to Seattle soon to be with him after his first treatment. They spoke jovially, unencumbered. They didn’t have to wonder if they were saying too much, going too deep, thinking morbidly, or speaking too candidly thereby reminding someone of our shared mortality. They just talked about life’s real and scary circumstances. They laughed. They squeezed packets of creamer into coffee that tasted like cigarette ash and one of them put peanut butter on her awful pancakes.

And she loved it.